I was in a store the other day, and a woman approached me for suggestions on what to wear with a burnt orange dress she planned to sport the following day.  Even though I am strongly against wearing said color due to loyalties I have to a different university (whose colors are not of the orange nature), I obliged and gave her my thoughts.

After she described more in detail her outfit, I immediately thought that turquoise accessories would work best to complete her look and described to her what I had in mind.

Not until later did I realize that I was unintentionally going off the color wheel rules.  Does any one else use this?  The basic idea is that colors best pair with colors on the opposite side of the wheel.  For example, green and purple look great together.
Sometimes, it's a given....certain colors definitely do or do not compliment each other.  But other times, a little more thought and/or experimentation is needed to assess whether a color combination works.
With color blocking totally on trend, I think typical ideas of color matching are being tested and expanded upon. 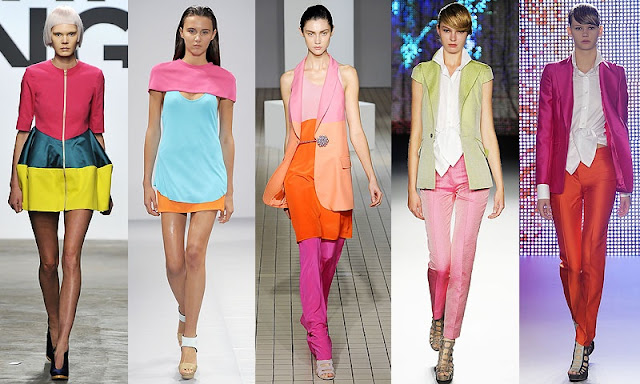 These days, one can make most anything work depending on the shade, however, some combinations are more pleasing to the eye than others.

Taking more risks in this department is something I need to work on, as I am trying to incorporate some more brights into my style...

Hello, my name is Kristen, and I'm a black-aholic.

This woman that approached me the other day told me she knows nothing about fashion, and that she's "just a SAHM".  I thought to myself that those two statements are not mutually exclusive....in fact, I almost told her so, but bit my tongue instead.  That's a discussion for a whole other post.

Anyway, I guess some have the color "sight" better than others when pulling together outfits.

But if ever you are in doubt, use the color wheel.  It won't dress you wrong.
Posted by The Mrs. and The Momma at 9:52 PM